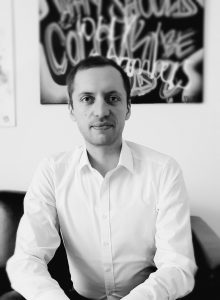 Gregor was born in 1993 in Berlin and is finishing mechanical engineering at TU Dresden focusing on aircraft construction. He grew up in a village with an airfield close to Berlin. That’s why he became passionate for aviation very early and got the opportunity to acquire his glider pilot license besides schooldays. To start an aircraft engineering studies after school was his logical conclusion.

“The possibility to write my final thesis in an innovative start-up about the most interesting topic an aircraft engineering student can imagine and being surrounded by nice colleagues motivates me a lot. To be a part of the team whose work and developments in designing a new aircraft concept will be affecting and are supposed to reform the individual transport all around the world is amazing. Not every student can finish his studies in such a great environment.”

“Even here in Germany people lose many hours stuck in traffic on the streets. But if you see cities for example in Asia or the US where regularly are traffic jams on highways with ten or more lanes, no one can honestly say that nothing has to be changed. These megacities will be the first to introduce air taxi service. Others in Germany as well will follow as people recognize the value of real flying point-to-point individual transport. Streets will not disappear, but money now used for building more or bigger ground infrastructure will be spent on opening the airspace for air taxis. No air taxi passenger must care about how to fly, thanks to autonomy. Only few persons will still own cars or air taxis. Most of them will be economical and ecological reasonably shared. In the future If you look up the sky is going to be full of X-1’s.”

© Copyright - Total WordPress Theme - All Rights Reserved 2020
Back To Top
×